I admit that at about this point in the writing challenge I am having some difficulty coming up with topics that would be interesting and worth writing about.  Yesterday in her comment to me elsie suggested that I write about the Byzantine rite since she and I am guessing a few others might not be too familiar with.  So, here goes.  Thanks for the suggestion, elsie.

Let’s start with a little bit of background.  First of all it is important to realize that the Byzantine or Eastern Rite church is a catholic church and holds all of the beliefs and doctrines of the Catholic Church.  Yes, we are under papal rule.  I will probably be using the terms Byzantine, Eastern Rite, and Greek Church interchangeably.  We are not, however, Greek Orthodox.

The Byzantine church historically was located in Eastern Europe, the Middle East, North Africa, and India.  My grandparents were Ukrainian.  They and others who immigrated sought out churches in this country that celebrated liturgies in their language since they didn’t speak English.

You can always tell a Greek church by the onion domes

.  Yes, Greek churches are elaborate as opposed to Latin Rite churches.  Another difference is the cross used by Greeks.  Our cross has three bars.

The top bar is the “title board” .  “The King of Glory” can be inscribed here,  The middle bar is the bar on which Our Lord’s hands were nailed.  The slanted bottom bar is a foot rest.  There are some questions as to whether this was a part of the actual cross.  It is alluded to in the words  [Let us] worship the footstool of His feet… (Ps. 98:5).

Inside a Byzantine church you will not find any statues.  Instead, you will see an iconostasis. 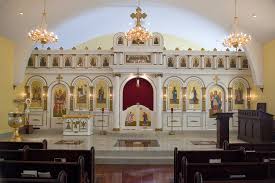 This is a screen that is placed in front of the alter.  There are three sets of doors in it: the center double doors, and single side doors.  These are opened at the beginning of the liturgy.  On it are pictured scenes form the life of Christ as well as images of saints and the apostles.

One last thing I will say about a Byzantine liturgy is that we have always received communion in both forms, bread and wine.  Bread cubes are placed in a chalice.   The priest used a small spoon to drop the communion into the mouths of those who are receiving.  We do not lick the spoon.

U don’t want to get too windy and sound like a history lesson so I think I will stop here.  Hope you did find this a bit informative.  Maybe tomorrow I will write about some of the customs and traditions in the Byzantine Church.

7 responses to “What is Byzantine?”